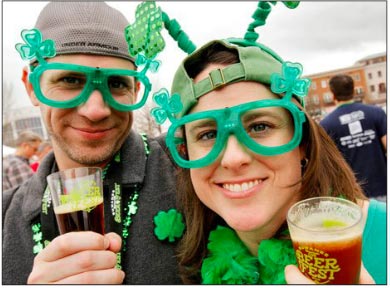 You’ve been asking and they’ve been listening!
Back for the seventh year in a row, the Suwanee American Craft Beer Fest is returning to Suwanee Town Center Park on March 18th, 2017. And this time your pleas have been heard! Shorter lines overall, you said. More bathrooms, more beer variety, less crowds, more fun! They’ve got you covered!
The event organizers are committed to giving people the best beer festival in the world and won’t stop until that has happened. They explained that although the event continues to grow in size each year, they do not want the overall experience to be compromised. A lot of work went into developing a new layout for the event. Organizers are confident this will improve the flow of the festival, allowing for shorter lines and additional restrooms.
Thousands of people will swarm Suwanee Town Center Park to drink their share of over 300 craft beers from breweries all over America while decked out in their most outrageous St. Paddy’s gear. This award-winning festival has earned the reputation of being one of the biggest and best beer festivals in the South and is an experience you don’t want to miss! Plus you can feel good knowing that over $50,000 of event proceeds has been donated to local charities to date.
Many participating breweries use the experience as an opportunity to debut new or rare seasonal beers at the festival, as well as brewing some specially for the VIP tent. The festival is packed with live entertainment, activities and games such as cornhole and beer pong, as well one of the largest home brew competitions in the state – sponsored by Brew Depot! Each year local home brewers submit their beer to be crowned “Best in Show.” A previous winner has even gone on to open his own local brewery!
For those who truly want a VIP experience, there is no better place to be than the VIP tent. VIP includes exclusive beers (brewed specifically for the event), casks, specialty beers and a delicious catered food spread. But don’t wait, VIP tickets sold out in less than one minute last year! Tickets go on sale February 5th at noon at suwaneebeerfest.com. This is a sell-out event so don’t wait – get your tickets early before they are gone!